The journey of a thousand miles begins with one step

That does not keep me from having a terrible need of – shall I say the word – religion. Then I go out at night to paint the stars. – Vincent Van Gogh in a letter to his brother

The town does not exist
except where one black-haired tree slips
up like a drowned woman into the hot sky.
The town is silent. The night boils with eleven stars.
Oh starry starry night! This is how
I want to die.

It moves. They are all alive.
Even the moon bulges in its orange irons
to push children, like a god, from its eye.
The old unseen serpent swallows up the stars.
Oh starry starry night! This is how
I want to die:

into that rushing beast of the night,
sucked up by that great dragon, to split
from my life with no flag,
no belly,
no cry.

It’s wonderful, isn’t it? The Starry night poem is beautiful as it touches hearts connecting the author’s feelings with ours. The Starry night poem was inspired by Vincent Van Gogh’s well known painting having the same name – Starry Night. Unlike other poems, this one starts with a quote from a letter sent by Van Gogh to his brother explaining his profound need for religion as an escape from the reality of his world, a need which, when fulfilled, allows him to touch that state of mind and soul that uncover his talent. In such condition, loving painting the stars.

Why painting the stars? Most probably as a form of glorifying the greatness of the world and of the Universe, something that’s closer to divinity than to reality. Van Gogh sees a specific beauty of the nature, an eternal beauty that transcends our living, a holiness of beauty.

The Starry Night is not a peaceful painting. It’s rather turbulent, despite it’s stillness. The brushstrokes twirl the sky and the eleven stars. The tree is like falling but somehow from the earth to the highness of the sky, looking like a lady’s hair with it’s curling branches, like a drowned woman floating on earth like the surface of the sky ocean. It’s needs one’s vision to see the scene up-side down. The silent town is also falling into the sky while being anchored into the earth.

There is also something about he refrain “This is how I want to die” which is repeated twice in the poem. It is a sort of mantra, and is fundamental to the meaning of this poem. Why? Most probably considering our ephemeral condition on earth, our lives coming and going while the nature makes it eternal.

Still, everything around is full of life, even in this stillness of the night. Even the moon is alive changing it’s shape and color continuously. In fact the elements of the sky spinning and creating the twirling shapes in the painting are also a form of life and movement, a way for the painter to show everything’s moving around.

The poem turns brutally from the artwork of Van Gogh to the life of Anne Sexton with a deep desire for death like into a swirl where her body would be sucked up by that great dragon, the death, losing herself into the great darkness. The snakes, present all over the painting are, probably, a form of the eternal sin as a condition and reason for leaving the life, passing silently into the night of death. 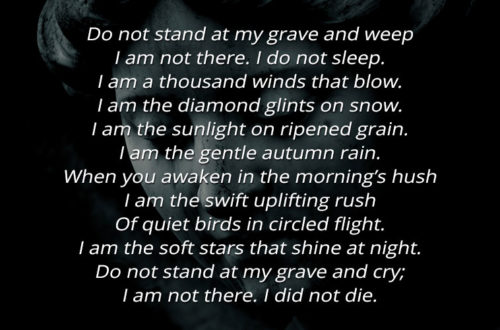 Do not stand at my grave and weep

Did you get your fire shoes? I got mine. And a pen, and paper, and a laptop and the desire to write. I am Monica Pierce and you can discover a bit of me on the About page.

How to reduce body heat
The human body has its own mechanism of regulating its temperature and in normal status, it is often at […]

Can dogs eat lettuce
Are you a dog owner and your pet always want to share your lettuce with him? Well, don’t deny your dog the joy […]

Christmas cactus
A popular and interesting houseplant with beautiful flowers, it has always made a great addition to every […]